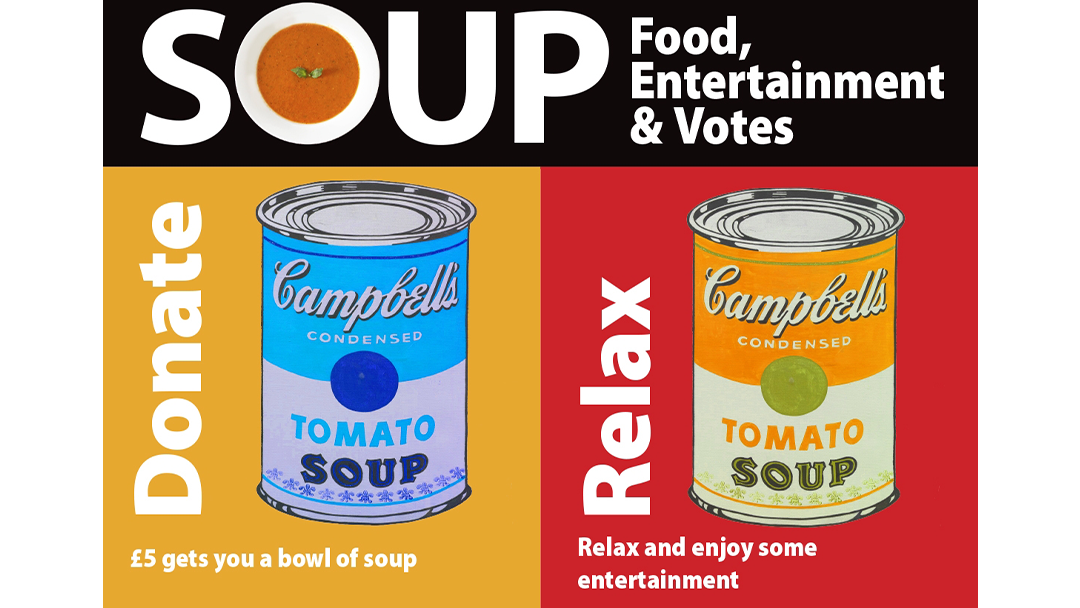 The 1st Fife SOUP event was held on Friday night in Dunfermline. An idea imported from Detriot, USA it offers a space where people who are trying to improve their community can connect.

It’s a simple idea, people turn up, pay £5 at the door, get a voting button, and listen to people pitch an idea to improve the local community, in effect a friendly dragons den! The pitchers can only talk for four minutes and definitely must not use PowerPoint. The audience can then ask them a maximum of four questions.

With the presentations over, soup is served. The attendees mull over the ideas, discuss what they have heard with the other people in the room, then they vote on their favourite by placing their button in a jar. The winner gets to take home all the money taken at the door to fund their project, with the promise they will come back three months later to report on their progress.

This inaugural Fife event, supported by BRAG Enterprises and Fife Council, attracted over 50 people with four enterprises pitching for the takings. Bee Buddies pitched to buy more hives so they can engage with local schools to teach kids about becoming a Bee Guardians; Suit and Pace pitched for funds to expand the Learn Differently Theatre which is an all access theatre; Dyslexia Pathways pitched for funds to continue to build a community and Kingdom Off Road Motorcycle Club who give kids a safe place to use off road motorbikes and quads, rather than use pavements. They pitched for new bikes to replace the ones recently stolen and for an adapted bike for people with disabilities

The winner on night was Kingdom Off Road Motorcycle Club who collected £265 towards the cost of an adapted motorbike. The other 3 Enterprises however made new connections and raised the profile of their projects and gained lots of new friends and supporters.

A great evening with SOUP and laughter. For more information on the next Fife SOUP event contact Lee at BRAG Enterprises 01592 860296, we hope to see you there.

You can find out more about which cookies we are using or switch them off in settings.

This website uses cookies so that we can provide you with the best user experience possible. Cookie information is stored in your browser and performs functions such as recognising you when you return to our website and helping our team to understand which sections of the website you find most interesting and useful.

Strictly Necessary Cookie should be enabled at all times so that we can save your preferences for cookie settings.

If you disable this cookie, we will not be able to save your preferences. This means that every time you visit this website you will need to enable or disable cookies again.

This website uses Google Analytics to collect anonymous information such as the number of visitors to the site, and the most popular pages.

Please enable Strictly Necessary Cookies first so that we can save your preferences!